Baghdad gets its groove back 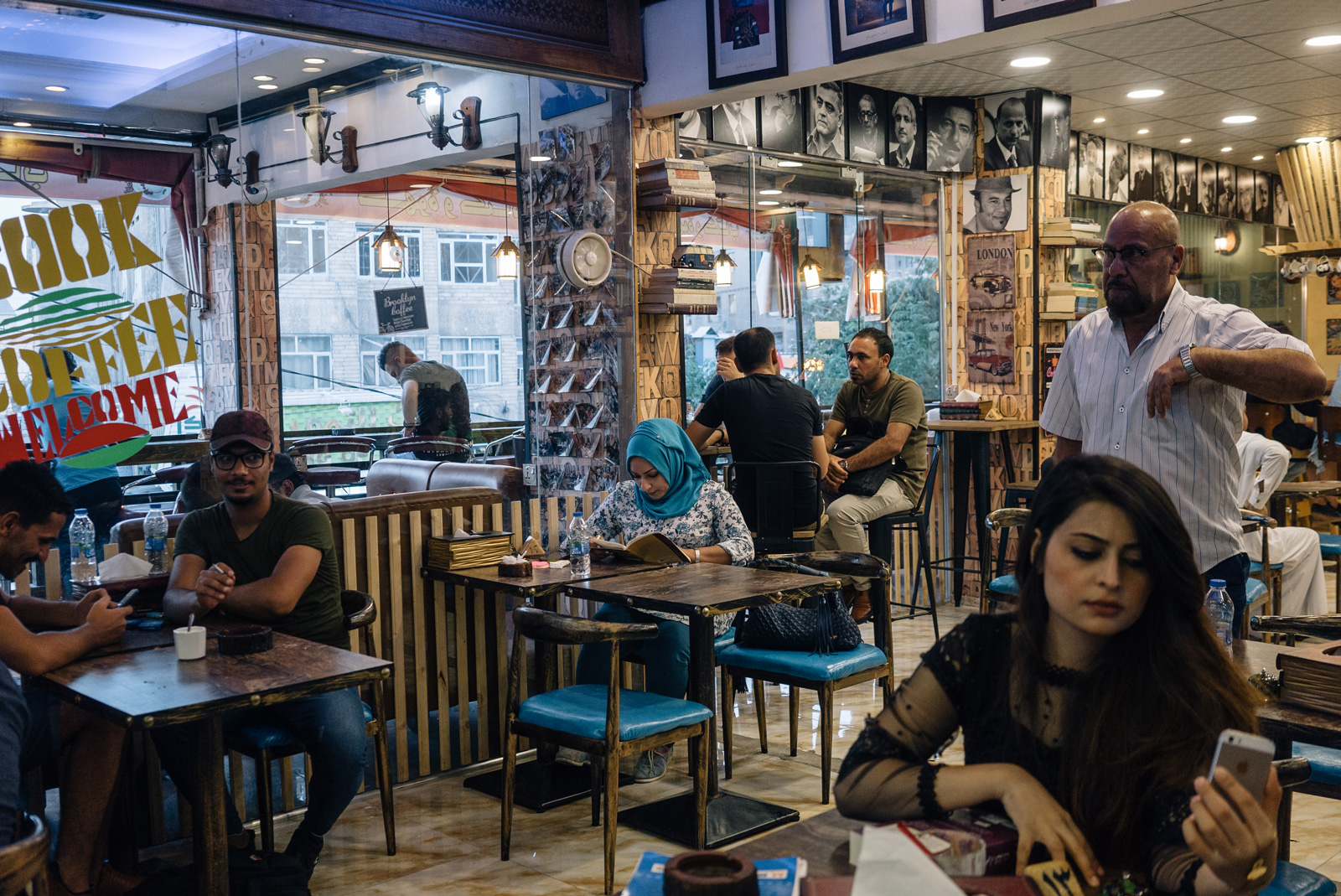 It’s nearing midnight on a Thursday and the streets are jammed with traffic. There are people heading home after dinner with family and friends, and people for whom the night has just begun.

At the newly opened Ibrahim Basha club, the party is just getting going. A Syrian singer with waist-length blond hair and sky-high pink heels is singing Arabic hits, accompanied by a talented Iraqi musician alternately playing the saxophone, the piano and the oud. When she breaks into old Iraqi favorites, the mostly male customers sitting at tables strewn with whiskey bottles get up and dance dabka, the traditional Arabic style that involves crescendos of rhythmic stomping.

Fifteen years after the U.S.-led invasion of Iraq plunged the country into a cycle of insurgency, dysfunction and war, Baghdad is undergoing a renaissance of sorts.

The insurgency still simmers and the dysfunction is as pronounced as ever. Iraqis angry at their leaders’ corruption and failure to deliver basic necessities such as electricity and water have spent the summer protesting in many parts of the country. There is little in the way of optimism among the wearied residents of a war-weary city that has been crushed too many times in the past to dare hope for a brighter future.

But for the first time in as long as anyone can remember, at least Baghdad isn’t at war. Although there are still explosions, and kidnappings are a problem, the relentless suicide bombings that deterred all but the hardiest revelers have abated since the territorial defeat of the Islamic State last year.

And the city is starting to breathe a little easier.

A more relaxed approach from lawmakers has allowed entertainment to flourish. A measure banning alcohol was voted down last year. Alice Martins/For The Washington Post

An old Iraqi film is screened during the exhibition of a private antique collection. Alice Martins/For The Washington Post

Cafes, clubs and bars are proliferating. There are shopping malls with cinemas showing the latest releases, including a glitzy glass enormity with a Dubai-style helicopter pad on the roof. There are restaurants on the river and plays at the theater and comedy nights at the coffeehouses.

On Fridays, poets recite their works and artists show off their paintings in the Ottoman-era gardens surrounding Mutanabbi Street, named for a 10th-century Iraqi poet who lived when Baghdad was at the epicenter of the civilized world.

The city still has a long way to go if it is to reclaim its past glories as a capital of culture and entertainment, Iraqis say. But there’s a widespread consensus that at no time in the past 40 years, since Saddam Hussein acquired absolute power and led Iraq into a series of ruinous wars, has Baghdad been as free and as fun as it is now.

“Every Iraqi has reached the conclusion that it is important to have as much fun as you can before you die,” said Alaa Kahtan, a theater director who had come to Coffee and Books, one of Baghdad’s hip new cafes that attracts a mostly literary crowd.

The absence of bombings is not the only reason for the new sense of freedom, Kahtan said. The Shiite militias and their associated political parties, which surged to prominence in the wake of the U.S.-led invasion of Iraq in 2003, are now more powerful than ever. They won big in the elections this spring and are set to play a leading role in whatever government emerges.

Their ascent, however, has also propelled the militias away from the petty intrusions into people’s lives that once characterized their attempts to assert authority, such as forcing women to cover their hair and blowing up liquor stores. A move to ban alcohol by the Shiite religious parties that dominate parliament was voted down last year.

“The militias have left these things behind and have ambitions to a bigger role. They don’t care what you wear or if you drink alcohol,” Kahtan said. “I feel more free in my theater, more free in my passions. I have a girlfriend, and I can hug her in the street.”

He recounted the reception to a scene in one of his recent plays in which a scantily clad woman wearing a niqab, or face veil, performs a pole dance. He was summoned by a government committee to account for the scene and received a visit from representatives of the militia run by the cleric Moqtada al-Sadr, who were worried that he was insulting Islam. It could have ended badly, but after explaining that he intended only to make a comment on the objectification of women, the matter was dropped.

There is no guarantee the curren

“All this could be reversed by the politicians, who have shown their foolishness time and again,” he said. “But we hope they have learned from the tragedies that went before, because neither Sunnis nor Shiites nor Kurds have the energy for another conflict.”

He credits ordinary Iraqis and their zest for life, rather than the inept government, for the new spirit. The surge of sectarianism that followed the 2003 invasion, when Sunnis and Shiites sought refuge in their religious identities and set about slaughtering one another, was an aberration, and Iraqis are reverting to their true selves, he said.

“There is something about the Iraqi character that dates back thousands of years,” he said, noting that historians credit Iraq with the invention of liquor some 7,000 years ago. “It is rooted in the Iraqi culture to have fun. Iraqis aren’t spiritual. They like to party.”

Some of the partying has a distinctly sordid air. The clubs lining Abu Nawas Street, which runs along the Tigris River across from the heavily fortified Green Zone — and is named for a beloved Iraqi poet who lived in the 8th century and wrote about wine and sex — are strictly men-only. Men pay steep prices to drink alcohol in the company of hostesses, and female customers aren’t allowed.

One of the somewhat more exclusive locales is the recently reopened bar on the rooftop of the Palestine Hotel, once a hangout for Baathist officials and now frequented by members of Iraq’s new elite. They pay $100 for bottles of whiskey and can choose company for the night from among the heavily made-up young women seated around the bar.

A doctor nursing a beer alone in one of the cushioned booths confided that he didn’t like the place but said there aren’t many better alternatives to grab a drink.

“It’s not like in your country, where men and women can go together to a bar and relax,” said the doctor, who declined to give his name because of the bar’s reputation. “This place is cheap. I mean morally cheap. It’s all prostitution.”

Women and children walk by a stand selling fresh juice on a Saturday night. Alice Martins/For The Washington Post

Families enjoy an evening out. Alice Martins/For The Washington Post

Many women are benefiting from the more liberal environment, too. Though most of the clientele at the Ibrahim Basha club were men, a middle-aged couple sat smoking shisha pipes and a family including women and children clapped to the music.

At the upscale Shawarma restaurant earlier that night, an Iraqi singer entertained a majority-female crowd, some wearing headscarves, some not, some in all-women groups. They tapped their feet and wiggled their shoulders and looked like they wanted to get up and dance, but didn’t.

Most Iraqis don’t drink, and it is cafes, where women can go out alone and freely mix with men, that have become the social focus. Until a few years ago, the dangers on the streets deterred families from allowing their daughters to go out alone, said Mariam Sultan, 24, who has a master’s degree in medical chemistry and works in a lab. She had come with a group of girlfriends to the Faisaliyah cafe, which opened last year and draws a mixed crowd with its comedy nights and live rock bands.

“People have become much more free in their attitudes,” she said.

For people who can’t afford cafes or bars, the Jadriyah bridge over the Tigris River serves as a sort of impromptu party venue. Typically, they come with cans of beer, turn on their car radios, and sometimes there is dancing.

The bridge is said to be the coolest spot in Baghdad because of the breeze that wafts down the river, and families come, too, especially in the summer when temperatures top 100 degrees even in the middle of the night.

“It’s too hot at home, so we come here, because there are lots of people and we can relax,” said Imad Salman, 50, who was standing on the bridge with his wife and three children. Thursday night had become Friday morning, a bit before 2 a.m.

Starting in mid-July, police have sought to stamp out alcohol consumption in the open air, and the bridge has become a target. As Salman spoke, a police patrol arrived. “Run, run, the police are coming,” someone shouted farther down the bridge. Everyone jumped into their cars and sped away.

Half an hour later, they were back. The police came back, too, and the people scattered again.

Mustafa Salim contributed to this report.