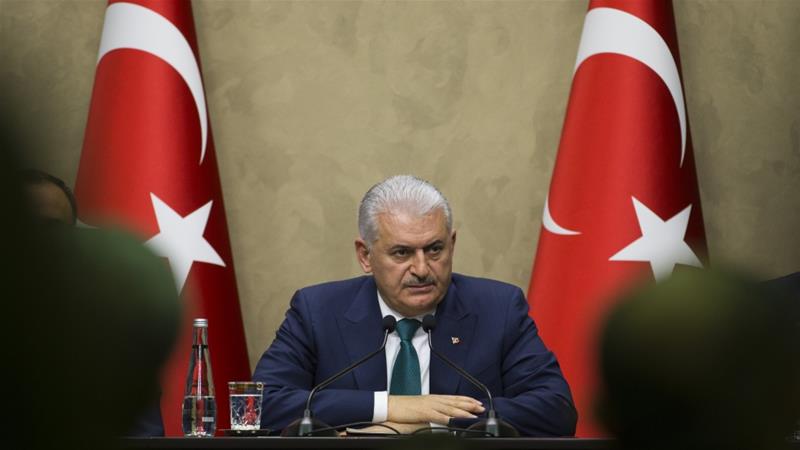 Stepping up Turkish warnings about expanding its military presence in Kurdish-controlled areas of Iraq, Yildirim said on Friday that Ankara would not hesitate to escalate an offensive against the Kurdistan Workers' Party (PKK) fighters across its southern border.

The prospect of a major military operation comes less than three months after Turkish forces drove Kurdish fighters from the Syrian border region of Afrin. Turkey says that PKK bases in north Iraq are next in its sights, despite protests from the central government in Baghdad.

Our forces have now been positioned some 30km into northern Iraq, working to prevent infiltrations and terror activities there," Yildirim said in an interview on his plane as he campaigned for June 24 elections in eastern Turkey.

Accusing the PKK of "provocations and traps" and long-distance attacks, he said Turkey would "of course go further" if such actions continued. "We will show no hesitation here until these elements are neutralised," he said.

"Every option (on Qandil) is on the table," he added.

Threat from Erdogan
His comments came a day after President Recep Tayyip Erdogan said that Turkey would strike Kurdish fighter camps in the mountains of northern Iraq in Qandil, Sinjar and Makhmur if the Iraqi central government did not clear the area of fighters.

Turkey already carries out regular cross-border air raids against the PKK in northern Iraq. On Friday, the military said fighter jets had struck shelters and weapons stores in Qandil and other areas.

Iraqi Prime Minister Haider al-Abadi said on Tuesday that Baghdad was ready to coordinate with Ankara to prevent cross-border attacks into Turkey, and said Turkish soldiers had been in northern Iraq since the 1980s.

But he called on Turkey to "respect Iraqi sovereignty" and accused Turkish politicians of raising tensions for domestic purposes.

"We will not accept an assault on Iraqi sovereignty even if it is a Turkish electoral campaign," he said.

Relations between the two countries have also been strained by a giant Turkish dam on the Tigris River which could exacerbate water shortages downstream in Iraq. Turkey said on Thursday it had stopped filling the dam at Baghdad's request.

With a large Kurdish population of its own concentrated in the southeast, Ankara has long resisted Kurdish ambitions for independence in Iraq, Syria or Iran, fearing it could inflame separatism inside Turkey.

Over the past two years, Turkey launched two military operations in northern Syria against the Kurdish People's Protection Units (YPG) which it says is an extension of the PKK - designated a "terrorist" organisation by the United States and the European Union.