This is how Kurdistan recalled the region's independence referendum 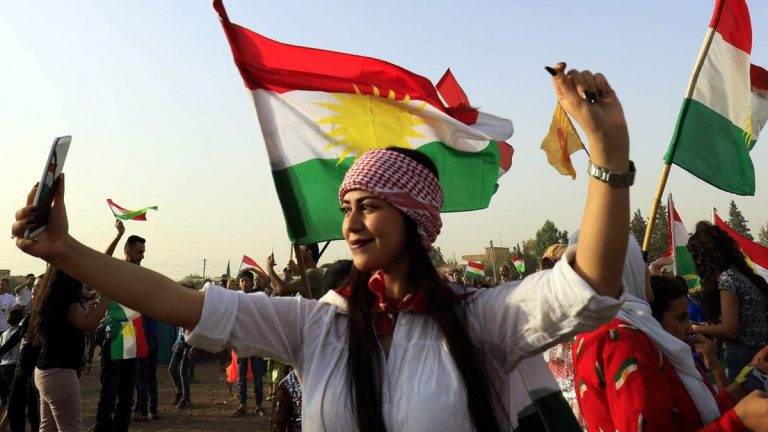 Shafaq News/ The four provinces of Kurdistan region celebrated on Wednesday the second anniversary of the independence referendum held on the 25th of September 2017.

The region had held the independence referendum on the mentioned date with the preliminary results showing casting the vast majority of votes by 92%, in favor of independence and the participation rate of 72%.

In "Pirmam," dozens of people gathered in the building of the municipality directorate raising flags of Kurdistan as they stressed that this day was historic and will not be forgotten or erased in any way from the memory of every Kurdish individual.

In the capital of Kurdistan region, hundreds of residents took to the streets expressing their joy and pleasure on this occasion as men and women roamed the streets with their horses carrying the flag of Kurdistan.

Near the archaeological castle of Erbil, many people and all the components in the region marched in support of the right to self-determination, stressing that the Kurds, like the rest of the world, have the right to have an independent state after they were deprived of it.

In Dohuk, many unions and associations organized concerts in halls this morning, where the celebrators called on the leader of Kurdistan Democratic Party, Massoud Barzani to continue his efforts to achieve the dream of independence.

In Sulaimaniyah, people came out with joy and pleasure, distributing candy to cars and pedestrians. In Halabja, a group of people raised the biggest flag of Kurdistan region in the province at its main entrance.

Many areas in the governorates witnessed various activities and events such as holding seminars, playing musical instruments, holding photographs exhibitions that documented the voting process on the referendum day and the folkloric wear of the components of the region.

The celebrators demanded the Parliament of Kurdistan region to vote on a decision to consider the anniversary of the referendum occasion as a national holiday to be remembered for ever.

For his part, the leader of the Kurdistan Democratic Party, Massoud Barzani, greeted the people of Kurdistan region on the occasion of the second anniversary of the independence referendum.

Barzani wrote a tweet on "Twitter" that "on this special day, I salute strongly , respect and appreciate those who have never bowed."

The former Kurdistan Regional Government, headed by Nechirvan Barzani, said that the referendum would be binding, because it would lead to the start of state-building and the beginning of negotiations with Iraq instead of declaring immediate independence. The federal government of Iraq has rejected the legitimacy of the referendum.

The date for the referendum was announced and delayed on several occasions as Peshmerga forces worked with the Iraqi federal government to liberate Mosul, but by April 2017, it was seen as going to happen sometime in 2017.

On 7th of June, 2017, the first president of Kurdistan region, Massoud Barzani, held a meeting with Kurdistan Democratic Party, the Patriotic Union of Kurdistan, Kurdistan Islamic Union, the Kurdistan Islamic Movement, Kurdistan Communist Party, Kurdistan Workers' Party, Kurdistan Workers Party, and the Progressive Reform Party. In Kurdistan, Erbil Turkmen List, the Iraqi Turkmen Front, the Turkmen Development Party, the Armenian List in Kurdistan Parliament, the Assyrian Democratic Movement, and the Chaldean-Syriac Assyrian Popular Assembly, as he confirmed that the Independence referendum date would be on 25 of  September 2017.