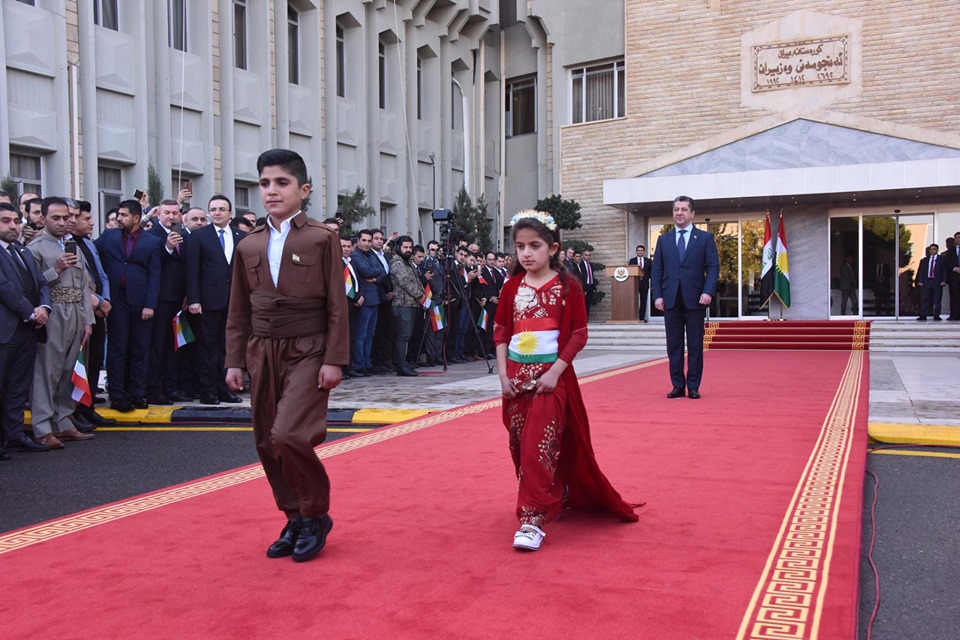 Shafaq News / In a remarkable step, the children of Peshmerga fighter had  the honor of raising the flag of Kurdistan Region in the Cabinet building, during ceremonies for Kurdistan Flag Day.

The Prime Minister of the regional government, Masrour Barzani attended the ceremony accompanied by the two children who raised the flag on the mast, among a group of Kurds.

Barzani singled out the honor of raising the national flag of the Kurds to the children of the Peshmerga fighter, Hogam Surji who was killed by ISIS in Mosul in 2015.

The President of Kurdistan Region, Nechirvan Barzani considered on Tuesday Kurdistan Flag as a symbol of a people's struggle for freedom.

Barzani said in a speech on the occasion of the Kurdish Flag Day, "The Kurds have struggled for years under this flag, and their goal was one and is to obtain the rights of the components of Kurdistan."

He stressed that this flag is a symbol of a people's struggle for freedom and equality.

As the Kurdish leader , Masoud Barzani said that Kurdistan flag is a symbol of unity and sacrifice in a message sent in the Flag Day revived in all Kurdish cities.

Barzani said, "The flag of Kurdistan symbolizes our unity and our struggle for peace, freedom and coexistence. On this day I would like to salute our martyrs who sacrificed their lives for our sacred flag."

The cities of Kurdistan Region witnessed celebrations on the occasion of Kurdistan Flag Day on Tuesday, as the flag was raised in government institutions, public places and schools.

Kurdistan Region raises its flag alongside the Iraqi flag on official departments and events, just as the Kurds in Turkey, Iran and Syria raise the same flag as a national symbol.

The Kurds are described as the largest nation without a state in the world.

The ceremony will be held by raising the flag, amid national chants.

Kurdistan Regional Parliament voted on the law to raise the flag of Kurdistan on November 11, 1999, which includes raising the Kurdish flag on December 17 of each year, which is the date of the flag raising for the first time in the Republic of Kurdistan in Mahabad city in 1946.

The Kurdish flag is composed of three main colors, which is red symbolizes the sacrifice made by the Kurdish people and green symbolizes the picturesque nature of Kurdistan, and white symbolizes peace, security, coexistence and tolerance.

The flag is surrounded by a yellow sun symbolizing the ancient religions of the Kurds, and it has 21 rays.

This number is considered sacred in the Zoroastrian religion, which some believe is the ancient religion of the Kurds, and it also symbolizes March 21, Nowruz of, which is the national holiday of the Kurdish people.