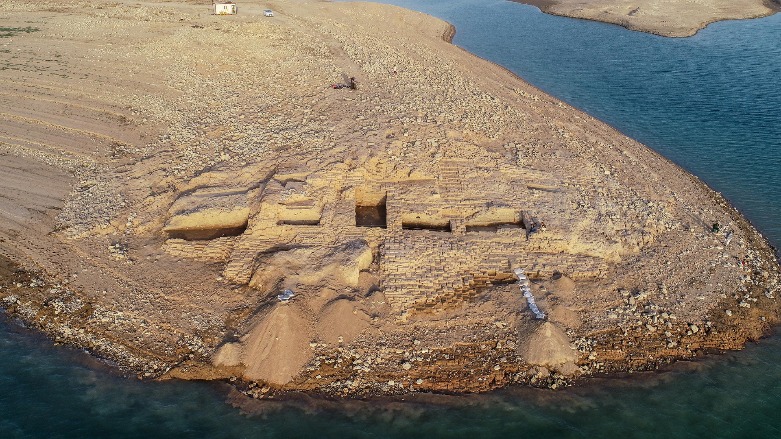 German and Kurdish archaeologists have uncovered a 3,400-year-old Bronze Age palace on the eastern bank of the Tigris River in one of the most important recent archeological finds in the region, the Tübingen University said on Thursday.

German-Kurdish research team came upon a surprising discovery as ruins emerge from the waters of the Tigris River.

“The find is one of the most important archaeological discoveries in the region in recent decades and illustrates the success of the Kurdish-German cooperation,” Kurdish archaeologist Hasan Ahmed Qasim noted.

The site of Kemune on the eastern Tigris can be dated to the time of the Mittani Empire, which dominated large parts of northern Mesopotamia and Syria from the 15th to the 14th century BCE.

The Mittani Empire is a kingdom of the Ancient Near East, but has not received the same levels of attention as other more significant ones.

Last autumn, decreasing water levels in the Mosul Dam reservoir due to draughts unexpectedly brought to light remains of an ancient city.

The area had been flooded following the construction of the Mosul Dam in the mid-1980s.

Archeologists has already discovered the site in 2010, but were unable to excavate it.

Only last year, due to a lack of rainfall and water, archeologists were able to launch a spontaneous rescue excavation of the ruins exposed by the receding water levels.

The research was headed by Dr. Hasan Ahmed Qasim (Duhok) and Dr. Ivana Puljiz (Tübingen), as a joint project between the University of Tübingen and the Kurdistan Archaeology Organization (KAO) in cooperation with the Duhok Directorate of Antiquities.

“Information on palaces of the Mittani Period is so far only available from Tell Brak in Syria and from the cities of Nuzi and Alalakh, both located on the periphery of the empire.”

Puljiz explained that even the capital of the Mittani Empire has not been identified “beyond doubt.”

“The discovery of a Mittani palace in Kemune is therefore of great importance for archaeology,” she added.

The archaeologists now hope to obtain new information about the politics, economy, and history of the empire by studying cuneiform tablets discovered in the palace.