Shafaq News / Gunmen killed a person on Wednesday with silencer guns in Baghdad's Sadr City, leaving behind, a "warning message" that might be a prelude to homosexual assassinations in Iraq.

"Preliminary information indicates that the victim is homosexual," noting that "a letter was found near his body saying: a warning message ... To the genuine Iraqi families, your children must be followed up from practicing homosexuality ".

The incident comes days after the European Union mission in Baghdad raised the rainbow flag above its headquarters on the occasion of the International Day Against Homophobia, for the first time in the history of Iraq.

The European Union Mission wrote on its Facebook page: "In conjunction with the Canadian embassy and the British embassy in Iraq, we are joining today in Baghdad European Union missions around the world in raising the rainbow flag to celebrate the World Day against homophobia , sexual transformation and highlighting the rights of gays and transgender / Bisexual (LGBT )people

Human rights organizations say that homosexuals have been vulnerable to murder in Iraq by unknown armed men for many years.

Fires broke out in the PMF headquarters in Baghdad

Russia comments on striking the American embassy in Baghdad: This is not permissible

Tight Security measures in Baghdad coincide with a prospective demonstration

Salahuddin enters highest levels of curfew because of Baghdad 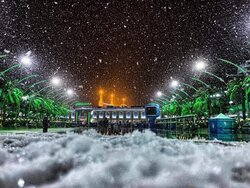