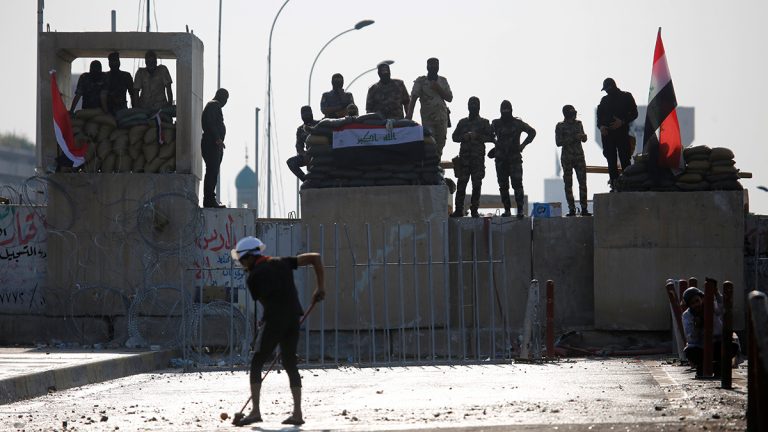 Shafaq News/ Iraq’s recent demonstrations are among the bloodiest protests in its modern history. Nearly 500 Iraqis have been killed and over 17,000 injured in the protests during the past two months, according to reliable estimates. But the protests in Baghdad and southern Shiite provinces should not come as a surprise. The Shiite-dominated government has not provided for the basic needs of its constituents. But what do those participating actually think about the protests? The Washington Post Newspaper said.

A unique survey of Iraqi protesters

In an attempt to get a better understanding of these protests’ dynamics and how protesters’ grievances can be addressed, a research group (Al Mustakilla) conducted a face-to-face poll of around 1,250 interviews with protesters in Baghdad and all main cities in the south of Iraq from Nov. 24 through Dec. 1. While there was no way to do a random probability representative sample, we targeted those participating in the protests with a purposive sample.

One of the most powerful findings of the survey was the overwhelming importance to protesters of the need to feel significant. In a nationwide poll conducted earlier this year, 3 of 4 respondents said they felt their lives had lost all meaning, while 80 percent said they felt depressed at least one time during the previous six months.

But participating in these demonstrations appears to have changed those feelings. Almost 94 percent of the protesters said that these demonstrations made them feel like an important person. Almost the same percentage said that participation in these protests made them feel as if they had a voice in the future of Iraq. And 97 percent mentioned that going to protests made them more proud of being Iraqis.

Older generations of Iraqis waited for the government to give them what they thought they deserved; the younger protesters are actively demanding it. Almost 90 percent said these protests made them feel that they are challenging the current system. This challenge can be summarized in the main slogan of these protests: Coming to grab my right.

The digital revolution and government corruption have severely undermined the ability of traditional institutions — like schools, religious authorities and families — to control young Iraqis’ behavior. Since 2004, the percentage of Iraqis who have mobile phones jumped from 1 percent to almost 100 percent — and more than 80 percent have smartphones with Internet access. Our surveys show that by 2018 (at the latest), Iraqis used the Internet as their main source of information.

What do the protesters want?

The protesters are demanding deep changes to the political system in general — and not just to the present government. Before the resignation of Prime Minister Adel Abdul Mahdi, 86 percent of the protesters said they would not stop, even if the current government was dismissed. And they have not — and are unlikely to be impressed by any reshuffling of the government based on old political coalitions.

An even greater problem for any lasting solution is the profound lack of trust in the current political players. Except for Grand Ayatollah Ali Sistani, the most influential Shiite cleric in Iraq, who enjoys the trust of 60 percent of the protesters, all other state players (legislative, executive and even judicial branch) are trusted by less than 5 percent of Iraqis, according to our most recent poll. Over 90 percent of protesters welcome an early election — but because of their mistrust of state institutions, a low percentage agree that it should be held under the current electoral commission or even under the supervision of Iraqi judges.

Outside international players receive a low level of trust as well. Iran is trusted by 1 percent of those interviewed, while the United States is trusted by 7 percent, the European Union by 25 percent and the United Nations by 30 percent.

Young Iraqi protesters have shown a remarkable capacity to resist being drawn into violence even though they have suffered great losses and there are persistent efforts by armed militias and security forces to draw them into violent behavior. The protesters remained focused and are insistent on achieving their goal of changing the political system into one that is merit-based and no longer shaped primarily by group affiliation.

While it is difficult to see a path out of the current bloody protests, it is noteworthy that 70 percent of the protesters agreed to having a reliable, early election under the supervision of the U.N.