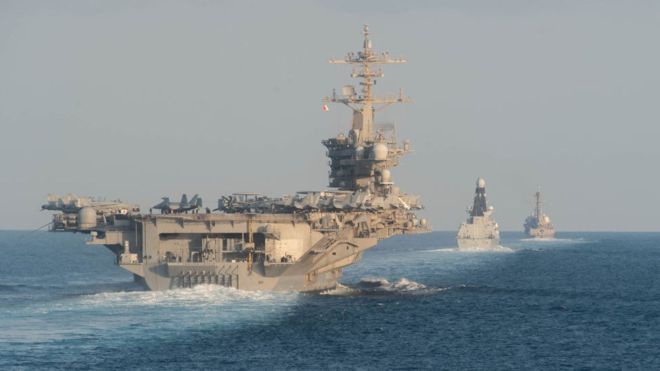 The US Navy accused Iran of carrying out "provocative and dangerous" acts against a number of American ships in international waters in the Gulf.

The US military said that 11 Iranian boats have intercepted 6 American ships participating in military exercises in the Gulf waters.

The US Navy explained that the boats approached the American ships at a high speed, accusing Tehran of violating international rules.

The Navy statement said that the American forces reserve the right to act to defend themselves.

While there was no comment from the Iranian authorities.

The American ships issued many warnings to the Iranian boats, which moved away after about an hour, according to the statement.

Tensions rose between Washington and Tehran earlier this year after a US air strike in Iraq killed the commander of the Iranian Revolutionary Guard Corps, Qassem Soleimani.

As on January 8, Iran responded with a missile attack on the Iraqi base of al-Asad where US forces were located, without causing the death or injury.

Earlier this month, U.S. President Donald Trump said Iran and its proxies had planned attacks on U.S. targets in Iraq, and warned that they would pay a "very high price".

Corona mortality decline would not happen without me : Trump

US: arresting a Woman suspected of trying to poison Trump

Trump pours out his anger on China

US congress condemns Trump's decision to withdraw from northeast Syria