Kuwaiti report: America is planning a military coup in Iraq while Iran is preparing

Shafaq News / A Kuwaiti newspaper revealed on Sunday that the United States is planning to carry out a military coup in Iraq to control power in Baghdad.

A report of the Kuwaiti newspaper, Al-Jarida quoted a source in the Iranian Quds Force as saying, "The Revolutionary Guards and the factions loyal to it in Iraq, particularly the Popular Mobilization Forces (PMF), announced a state of alert with all the forces, in anticipation of a military coup that the Americans are planning to seize power in Baghdad."

It added that "the Iranian security services obtained intelligence information that the Americans informed their allies in Baghdad that relying on civil society organizations is no longer effective, and will not succeed, without a parallel move by the armed forces loyal to Washington to finish off Tehran and its allies in Iraq."

The newspaper quoted the source as saying that "the political structure in Iraq does not allow the Americans to have a pro-government prime minister come to power, except in the event of a pro-Washington military coup to control power."

The source said that "the Iranians have opened extensive communication channels with Sunni and Kurdish Iraqi parties to form a coalition facing the new" American plans ", especially in light of Washington's attempt to exploit Tehran's concern to confront the spread of Corona virus to pass it.

He explained that "the Iranians are trying to convince all Iraqi political parties that everyone's interest requires that a civilian prime minister be able to control power in any way, and that any" military coup ", if occurs, would mean everyone losing all of their gains, and perhaps Iraq returning to what It was under Saddam Hussein’s regime. "

The source pointed out that "Washington's liquidation of the commander of " Quds Force "Qassem Soleimani and Vice President of the" PMF "Abu Mahdi Al-Muhandis represented the beginning of the American move to seize power in Iraq, because the Americans were aware that Soleimani had close contacts with many Iraqi politicians, and he could have turned the table at them at any moment. "

The source acknowledged that "Tehran has suffered a great hit by losing Soleimani and has not been able, until now, to fill the void left by a character who possesses the necessary “charisma “to influence all of Iran's allies in the region." 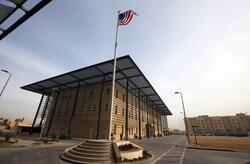 At the "anniversary of burning the U.S. embassy”... How did Trump deal with the Iranian Consulate incident in Karbala?